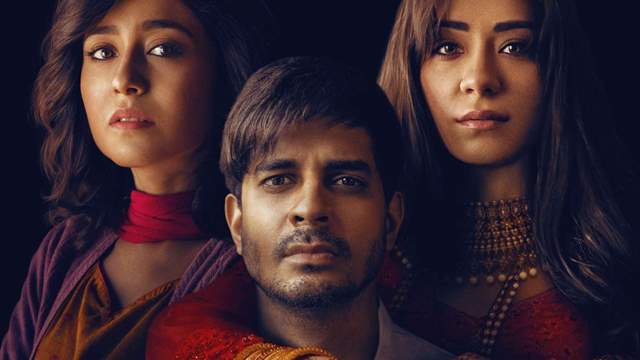 Yeh Kaali Kaali Ankhein, a new Netflix twisted love storey starring Tahir Raj Bhasin, Shweta Tripathi, and Anchal Singh, is a story that will play with your senses at every turn. Vikrant is eager to live a quiet life with his college sweetheart Shikha, but his intentions are thwarted when Purva’s intense desire to have him takes over. This program is a complete entertainer, with action, romance, and incredibly edge music. Yeh Kaali Kaali Ankhein is produced by Edgestorm Ventures Pvt. Ltd. and directed by Sidharth Sengupta, who is known for successful television productions such as Balika Vadhu and the series Apharan.

Tahir Raj Bhasin’s portrayal of Vikrant is unquestionably impressive. Given the actor’s ubiquitous presence, it’s impressive how he manages to make each role distinct and visible. At a time when we’ve seen him in previous roles and will continue to see him in other roles, the fact that he stands out yet again proves the actor’s caliber. And whether you like the show or not, you can’t deny that the performance is fantastic.

Shweta Tripathi as Shikha, doesn’t disappoint once again. You know when you see a show or a movie with her in the pivotal role, it is going to be an absolute pleasure, and that is what her performance proves to be.

Anchal Singh aka Purva, is a great surprise that comes along the show, and though you want to dislike her and detest her, to say the least, you do, but you don’t. Those mixed feelings that she gives you with her performance, is testimony to what great actor she is, and just how nicely has the show been written.

Brijendra Kala, Arunoday Singh, Surya Sharma, Anant Joshi, Sunita Rajwar, Shashi Verma, Anjuman Saxena, and Hetal Gada all do an excellent job in their roles and contribute to the story’s development. Saurabh Shukla, who plays a powerful gangster politician, is once again a brilliant cast member who manages to control the role.

The show’s setting is nothing new, but the fact that it keeps you fascinated even when you think you would want to skip ahead is the area in which this show excels – and in these times, it is a fantastic thing for any show. The plot is tight, the performances are fantastic, and the film is beautifully photographed. The show has a nice look and feel to it, and you like watching it for the most part.

The sequence of events has a poetic quality to it, and even though they end up being a tragedy, if we can call it that, the Netflix show is still worth watching. Murzy Pagdiwala, Rahul Chauhan, and Murli Krishna’s cinematography in Yeh Kaali Kaali Ankhein is lovely and conveys those things.

Maybe it’s because Vikrant is narrating the storey that it’s bittersweet? But there’s something about the show that has a bit of an edge to it, and you’ll probably figure out why in the end.

The Not So Good

There’s a scene right in the middle that can make you want to turn off the television. It feels dragging but not boring, and despite the fact that it does not pick up on time, you have mixed thoughts about sitting through it. When you’re halfway through the show, the climax isn’t as impressive as you’d hoped. The finale, while not without flaws, is something that many people would find unsatisfactory!

If this is a genre you appreciate, you will enjoy watching the show; but, you must binge watch it since if you stop, you may never return. Yeh Kaali Kaali Ankhein gets the tragic note to a love storey correct, and also does right by it, with a lesser second half but superb performers and a good-looking presentation.