Although Marvel films are typically exhilarating and adventurous, If we are being truthful, they can also be difficult to follow sometimes. We often get confused if we have to watch a marathon. Where exactly do we get started? From genesis narratives to spinoffs and sequels, the MCU chronology is not always obvious and straightforward, and the films’ launch dates are not always within the chronological order, especially with Marvel’s popular X-Men franchise. 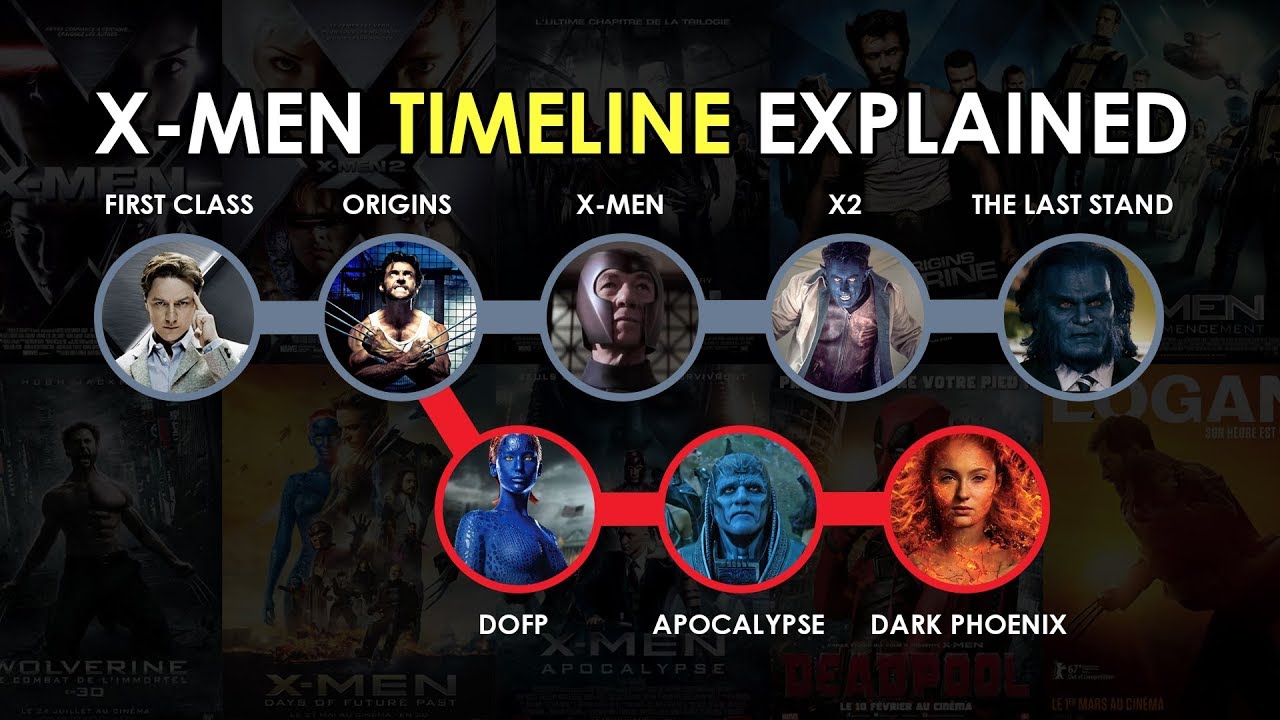 Although it may not be as straightforward as, say, Harry Potter 1–8 parts, if you are up for an X-Men movie marathon session, Then, you have come to the right place. This article is here to assist with the actual list of X-Men films in chronological order sequence. So, it is not necessary that the year in which X-men movies were released, we have to go according to that order.

Here, it has also produced a list of X-Men films in sequence of upcoming releases if you like that.

What is the Chronological Order For X-Men?

In total, there are 13 movies.

Published in 2011. X-Men: First Class might not be the very first prequel to be made into a movie, but it was the very first in the X-Men world. It is set in the 1960s and features James McAvoy as Charles Xavier alongside Michael Fassbender and Kevin Bacon.

Published in 2014. Days of Future Past, featuring Hugh Jackman, Peter Dinklage, Jennifer Lawrence, Halle Berry, Nicholas Hoult, Anna Paquin, McAvoy, and others, is set in 1973. This is why it is here in the chronology. However, the plot is heavily focused on the future; 2023 is the year.

Published in 2009. Because this is a genesis narrative, some of Wolverine’s beginnings took place in 1845, when he first found and controlled his new abilities. But, aside from that prologue, the majority of X-Men Origins: Wolverine takes place in 1979, as James Logan deals with his brother’s animosity, his experiences in special operations forces, and much more.

Released in 2016. The Apocalypse is centred in the 1980s, and it pits the X-Men against a strong monster named En Sabah Nur, played by Oscar Isaac, who is hell-bent on destroying the planet.

In 2019, it was published. X-Men: Dark Phoenix, starring Sophie Turner as Jean Gray, who becomes known as the Phoenix near the end of the movie. It is set in 1992 and is the final instalment in the franchise to chronicle the adventures of the young ensemble.

Released in the year 2000. X-Men was the very first film in the series to be presented in the current world. It is the sixth film in the XMCU (X-Men Cinematic Universe) in terms of chronological sequence. The film X-Men is set in the year 2000, the same year it was released in theatres around the globe. This film establishes the X-Men world by establishing the Brotherhood and, of course, the X-Men themselves.

Published in 2003. The show’s first successor, X2: X-Men United, was released in 2003, and the happenings of that film are likewise set in the same year. Colonel William Stryker, an anti-mutant, kicked things off by kidnapping Professor X, compelling the X-Men to combine forces with their arch-enemy.

Published in 2006. X-Men: The Last Stand was released in 2006 and serves as the latest part of the original show. The authorities discover a treatment for abnormalities in this kind of sequel. Jean Gray also debuts her other character, Phoenix, for the very first time in the series, in terms of publication date, but not in terms of chronological order.

Published in 2013. In this 2013 successor to both X-Men Origins: Wolverine and X-Men: The Last Stand, Wolverine makes a comeback. Jackman’s protagonist travels to Japan to reunite with an old acquaintance whom he rescued many years before. Wolverine is grieving the loss of Jean Grey while being caught up in a conspiracy to control mutants and the yakuza.

Released in 2016. The Ryan Reynolds-led Deadpool picture, about a cancer-stricken man who would go to any length to protect his own life, made a big splash on its own for having, well, a really amazing movie. While watching Deadpool as part of the X-Men series is not strictly necessary, if you are feeling really detailed, you might want to include it in your marathon.

It was recently released in 2020.is difficult to situate since it was originally planned to be filmed in the 1990s, but the authorities insisted on it being set in the contemporary day. Although it is theoretically set in 2017 and features five new, adolescent mutants, the happenings of this film have little impact on the happenings of prior films, and vice-versa. It’s just sort of its own entity floating around in space.

In 2018, it was published. Deadpool 2 was released two years after the first, and it includes an appearance by the youthful X-Men. Deadpool travels through time to X-Men Origins: Wolverine in this film, which premiered in 2018 and actually occurs in 2018.

In 2017, it was published. Logan was released in 2017, although it is set in the year 2029, when mutants are on the verge of extinction. Logan, played by Hugh Jackman, is much older and far removed from his heroic past as Wolverine, but he felt obliged to aid a mutant kid called Laura. It also neatly wraps up the entire saga.

Hope this article helps you run this marathon in a proper manner. Enjoy watching!