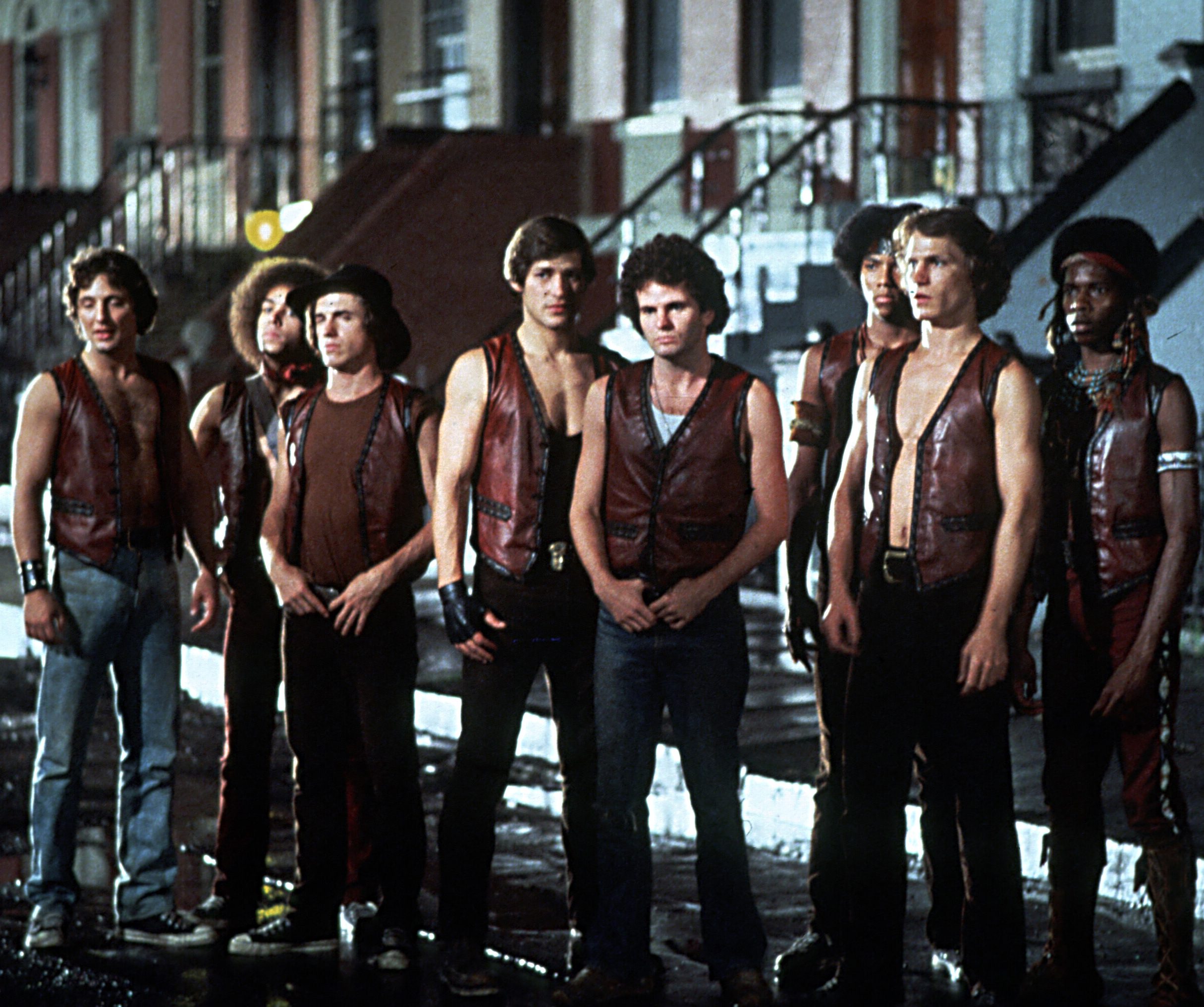 A Coney Island street gang known as The Warriors is invited to a huge night-time gathering organized by Cyrus (Roger Hill), the head of The Gramercy Riffs, who are the biggest gang in New York. When they arrive, they find themselves standing amid delegates from all of the major gangs in the city. In a grand speech, Cyrus proposes an ambitious plan whereby they put aside their animosities and come together to take over the whole Big Apple, district-by-district. However, his grand scheme is put to an abrupt end when Luther (David Patrick Kelly), the psychotic leader of another gang called The Rogues, guns him down in cold blood from an unseen vantage point within the crowd. At that moment, the police close in on the massive gathering, resulting in an ensuing fracas as the many gang members scramble to escape the scene. In the ensuing chaos, Luther attempts to absolve himself of the assassination by pointing the finger at The Warriors’ warlord, Cleon (Dorsey Wright). The Riffs buy his story and proceed to beat Cleon into an early grave.

Before realizing what has happened to their leader, the rest of The Warriors beat a hasty retreat and plan to take the subway back home. In Cleon’s absence, Swan (Michael Beck) assumes command – something that his aggressive rival, Ajax (James Remar), isn’t entirely happy with. Moreover, with Cyrus dead, they are unsure of whether the truce between the gangs still holds, thus making their journey back a potentially dangerous one. The good news is that the other gangs are still siding with The Riffs. The bad news, however, is that the message has been sent out to them (via an unnamed radio D.J., voiced by Lynne Thigpen) that The Warriors were responsible for killing Cyrus – thus meaning that the remaining seven members have been put in even greater peril than they believe.

Why is it significant?

The Warriors is based on a 1965 novel by Sol Yurick – which, in itself, was based around an ancient Greek tale called Anabasis by Xenophon. American International Pictures bought the rights in 1969 but sat on them for several years before agreeing to sell them on to producer Lawrence Gordon. Gordon successfully pitched it to director Walter Hill and they made the film together in 1978.

It has come to be regarded for its place in Hill’s consistently great early run of seven action films released between 1975 and 1984: Hard Times, The Driver, The Warriors, The Long Riders, Southern Comfort, 48 Hrs and Streets of Fire. Hill is also recognized for having co-produced Ridley Scott’s Alien (1979) during this period. However, as with John Carpenter’s run of 1970s and 80s films, a number of these weren’t so positively-received at the time and only gained proper appreciation with hindsight.

Contemporary reviews for The Warriors were variable; Pauline Kael of The New Yorker clearly enjoyed it but Roger Ebert of the Chicago Sun-Times was less impressed. However, it did fare pretty well commercially, taking over $22 million on its US theatrical run from a $4 million budget. Unfortunately its success was marred, ironically, by its popularity amongst real-life American street gangs. There were violent confrontations in cinemas which even resulted in three homicides. As a result of the ensuing controversy, Paramount felt that they had no choice but to pull it from cinemas after several weeks.

Even the film’s shoot was rather fraught with trouble from the real-life New York gangs who were ubiquitous in the city’s pre-Mayor Giuliani days. Co-producer Frank Marshall recalled that “The different territories were very much like in the movie”. Some thought that the actors were genuine gang members encroaching on their territory. Moreover, when the right people weren’t paid off, various unpleasant and terrifying incidents occurred – ranging from the cast being urinated on from an elevated subway track, to the crew having bricks thrown at them, to a production truck’s tires being slashed.

Other challenges arose during filming. Some of these arose around actor Thomas G. Waites (playing Fox), who was originally supposed to be the lead. At that time, he was the biggest name in a largely unknown cast, having shown some promise in a major role in On the Yard (1978). However, a series of disagreements between him and Walter Hill resulted in the director having his character killed off partway through and his name being taken off the credits. Michael Beck’s character was then rewritten to fill his place.

The shoot was also under intense pressure to wrap to a tight schedule due to competition from another New York street gang movie called The Wanderers, directed by Philip Kaufman. Hill had originally wanted to add some embellishments which included an opening narration by Orson Welles and some comic book-style chapter-opening panels. However, these ideas were canned in the rush to release the film. The 2005 Ultimate Director’s Cut finally included these touches in accordance with his vision – albeit with Hill himself providing the narration. Nonetheless, this latter version (which was released around the same time as a Rockstar PS2 game based on the film) has received rather mixed opinions from fans.

Some devotees have suggested that The Warriors can be classed as a piece of dystopian science fiction, especially in the light of the fact that Hill originally wanted the film to have a title card clearly indicating that it is set sometime in the future. This idea was snubbed at Paramount’s behest, reportedly because they thought that it would make would-be audiences incorrectly believe that it was a Star Wars knock-off. Others have pointed out that real-life street gangs were such a major problem in New York and other US cities during this time that the film was merely reflecting contemporary reality, albeit in a rather stylized manner. Regardless, it is indisputable that it did stamp a certain influence on dystopian SF action movies in subsequent years, including John Carpenter’s Escape from New York (1981) and Enzo Castellari’s 1990: The Bronx Warriors (1982).

How does it hold up?

The Warriors has a wonderfully tight and economical way of communicating its storyline across – no doubt forced, in part, by the production’s well-known budgetary and scheduling limitations. This is evident right from the opening credits, which begin by establishing the eerie nighttime atmosphere via shots of Coney Island’s Wonder Wheel and subway trains which are only visible via their garish lighting in the pitch darkness. We then hurtle through a montage of vignettes of our titular gang hanging out on the train, using handholds as impromptu boxing equipment and describing the fateful meeting they are headed towards via brief snippets of dialogue. In amid these shots of the actors, Barry De Vorzon’s soundtrack chronicles their journey via repeated close-ups of the subway map.

It’s a film with an expert grasp on action, excitement, mood and tension throughout. The various gangs that The Warriors encounter during its course are introduced via quieter “calm before the storm moments” before the inevitable chases and fights ensue. Some of them, such as the Baseball Furies and, of course, the omnipresent Gramercy Riffs, have a genuinely sinister vibe. On three occasions, however, moments of more subtle female-focused tension are introduced. In one case, a rather weedy gang known as The Orphans appear to pose little credible threat to our protagonists – until, that is, the slutty Mercy (Deborah Van Valkenburgh) walks out of her front door and goads them with chicken noises. In another scene, one of the Warriors attempts to force herself on a middle-aged woman (played by Mercedes Ruehl) who happens to be sitting on a park bench in the middle of the night. He doesn’t realize, until it’s too late, that she’s an undercover cop! On another occasion, three of the group are seduced by a few vaguely innocuous-looking young ladies who turn out to be a gang called The Lizzies who, as with just about everyone else here, are out for their blood.

There is also a distinctively otherworldly vibe to the film. The gangs are very much the life and soul of this city during the nighttime as they loiter or drive around, bedecked in their strange and colorful garb, waiting to pounce on our heroes. Most of this world, and the film’s screen time, is given over to them. Ok, so we do occasionally see people who aren’t color-wearing gang members – but these are either hangers-on (be they the radio D.J. who relays their status updates, or the promiscuous Mercy who clearly has a thing for tough guys), are marginalized background characters (a hapless girl at a street-side stall who fails miserably to get Luther to pay for the candy bar that he has taken), or are briefly-seen cops.

One of Walter Hill’s greatest strengths during his heyday has been his ability to get fine, believable performances out of his cast. This is also the case here. However, while Michael Beck is fine as the tough, chiseled lead, some of the other actors clearly overshadow him. Roger Hill may only appear onscreen for a couple of minutes at the start of the film, but he still makes one hell of an impression with his truly rousing and regal delivery of his “Can you dig it?” speech. James Remar is also great as Swan’s boorish, impulsive and rather rash rival Ajax. The director himself obviously liked work here since he would cast him again in The Long Riders, 48 Hrs and Wild Bill. Deborah Van Valkenburgh brings layers of humanity and depth to a character who initially seems quite obnoxious but clearly, deep down, just wants more from her sorry life than she has been given. The most memorable actor here though is David Patrick Kelly who plays the film’s main antagonist, Luther, as a whiny, seething, coiled, psychotic little alley cat. His most memorable bit of dialogue comes near the end:

“Warriors! Come out to play-e-ay!”

Despite the controversy that it faced during its release, The Warriors actually seems fairly mild in the violence department, especially by today’s standards. Sure, plenty of gang members get punched, hit by baseball bats or smashed through men’s washroom fixtures. However, there are only two or three mildly bloody moments, the strongest involving a throwing knife being embedded in one character’s arm. During the few occasions when characters are killed, these usually take place offscreen. On the other hand, you don’t need explicit scenes of violence to make an exciting film – something The Warriors succeeds admirably in achieving.