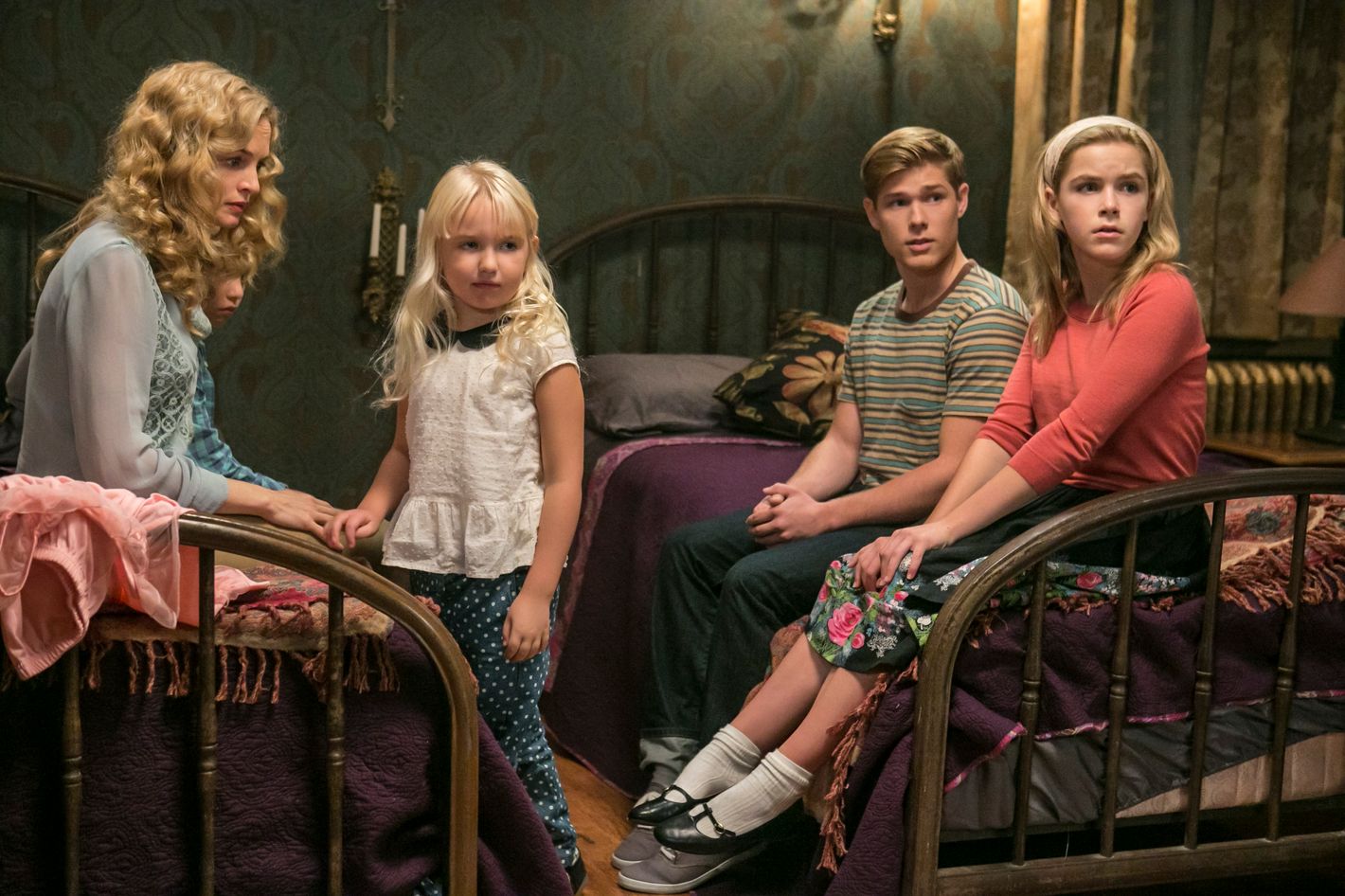 An inheritance with a catch

This horror melodrama, adapted from a 1979 novel of the same name by Virginia C. Andrews, begins with an expository montage narrated by Kristy Swanson who plays Cathy, an adolescent who starts out the tale living happily with her mother (Victoria Tennant), father (Marshall Colt) and three siblings Chris (Jeb Stuart Adams), Cory (Ben Ryan Ganger) and Carrie (Lindsay Parker).

One day, when they prepare to greet their father with a surprise birthday party, the police pay the family a visit and break the terrible news: he has been killed in an accident. With no means to support themselves, their mother decides to take them out of their suburban home and go to live with their wealthy grandparents in their mansion. Since her grandfather is sick, it is only a matter of time before he croaks, thus giving her a shot at snagging his inheritance. It sounds like a perfect plan: the main snag, however, is that he has written her out of the will. On the bus journey there, she tells the children that she is determined to get back into his good books before he passes away.

When they arrive, they are greeted by grandmother (Louise Fletcher), a cold-hearted religious fanatic who forces the children to remain locked in a room upstairs. While they are not at all happy about the situation, their mother convinces them that it will be worth it when she finally gets her hands on the money. However, it starts to become clear that this unpleasant situation is even darker than it initially seems.

Script: Jeffrey Bloom, from a novel by Virginia C. Andrews

Virginia C. Andrews’ novel Flowers in the Attic was a major success, selling more than 40 million copies worldwide. During the 1980s, since horror novel adaptations were all the rage, it would only be a matter of time before it would receive its own big screen treatment. Unfortunately, the critics didn’t take too kindly to the results.

One of the core issues was that the original novel’s potent subject matter of incest and child abuse was toned down to appease censors and squeamish audiences, rendering the end product little more than a mild gothic horror potboiler with the odd vague hint of perversity. Reportedly, Wes Craven wrote a more graphic draft early on but it never got filmed as the producers refused to allow him to have creative control. After he pulled out, a milder version of the story was written and directed by Jeffrey Bloom. Even this filmed version, however, received a number of cuts and a reshot ending at the production company’s insistence. This was partially a response to negative reactions to test screenings, and partially an attempt to catch the PG-13 adolescent horror market which had turned up in droves to films like Gremlins.

Nowadays, of course, the only viable viewing option is to sit down and savour it as one of those 1980s guilty pleasures. It’s not a great movie by any means but just about hits the mark as a mild piece of hammy exploitation. Director Bloom tries his damnedest to fill the piece with a sumptuously gothic atmosphere, framing the cast artfully amid ornate wooden bannisters and the dusty, bric-a-brac filled attic of the title. There’s even a nighttime escape attempt with some fraught clamouring over rooftops, perilous dangling from fraying ropes and vicious guard dogs emerging from thick billows of fog. The proceedings are efficiently paced enough to avoid boredom and are backed by an elegantly haunting soundtrack by horror specialist Christopher Young (who also scored the Tobe Hooper Invaders from Mars remake and Clive Barker’s Hellraiser).

When you look at anything beyond surface level, however, Flowers in the Attic falls flat. For one thing, the acting leaves a lot to be desired. The best performance here comes from Louise Fletcher, who manages to be somewhat creepy in a rehash of her Oscar-winning Nurse Ratched character from One Flew Over the Cuckoo’s Nest. However, Victoria Tennant’s typically aloof butter-wouldn’t-melt-in-her-mouth style of acting fails to make her more elaborate and ambiguous mother role really work. She was somewhat famous during this period, albeit less for her own acting career than for her marriage to comedian Steve Martin. Kristy Swanson is awful as the adolescent daughter, coming across less like a complex victim of what would amount to severe psychological damage and more like a pouty spoilt brat throwing a strop. Swanson was a rising star at the time, having played the lead role in Wes Craven’s own Deadly Friend the previous year. However, her greatest moment of fame was to come later, via the dubious distinction of landing the title role in the 1992 Buffy the Vampire Slayer film (you know, the one which was overshadowed by the immeasurably superior TV spinoff show several years later). On the other hand, she’s not as bad as the actors who play her three siblings – Jeb Stuart Adams, Ben Ryan Ganger and Lindsay Parker – all of whom are incredibly wooden and, not undeservedly, have remained largely unknown ever since.

You can type this shit, but you sure can’t say it

To be fair, the actors weren’t given much solid meat to get their teeth into in the script department. Even an actress of Meryl Streep’s calibre couldn’t have made the clunky and occasionally unintentionally hilarious dialogue here sound convincing. Here is a classic example of the kind of ridiculous lines which the cast members have been forced to demean themselves with:

The most fundamental issue with Flowers in the Attic is that there’s no solidly consistent reason given as to why these youngsters don’t just bust themselves the hell out of there. During their first escape attempt, they face some snarling Alsatians and a groundskeeper wielding a shotgun. Later on, however, they easily manage to break out and creep around the house on a number of occasions, facing very little in the way of credible danger in the process. In real life, an elderly lady – even one as scary-looking as Louise Fletcher – would struggle to pose any serious threat to two physically able adolescents. Despite this and the fact that, at one point, starve chooses to starve them for several days, they still decide to hang around until the end of the film in the hope of the promise of their mother inheriting vast wealth finally materializes. Haven’t they heard of telephones? The cops? Foster homes?

The climax is so silly that it had me in gales of laughter. Let’s just say that the line “EAT THE COOKIE!” features heavily, as does an incredibly clumsy fall off a balcony into a greenhouse.

One wonders how the movie would have turned out had Wes Craven’s original vision been used. After all, he took a vaguely similar idea in a rather different direction with his underrated The People Under the Stairs (1991). As it is, while I would be lying if I said that I didn’t enjoy this version, this is more due to the execution being so shamelessly inane than anything else.

This isn’t the best Arrow presentation that I’ve ever seen. The picture looks a bit grainy with a few artefacts visible. The colors are OK but seem somewhat faded in places, in particular the character’s faces. Sound-wise, on the other hand, it’s pretty rock solid.

Diabolique Magazine editor Kat Ellinger contributes a wonderful, genre-literate commentary to the film. She talks about the differences between various incarnations of the story, ranging from the book (which she considers a “rite of passage” in her life) to both the original and released versions of the film and even Wes Craven’s earlier incarnation of the screenplay. She also discusses the gothic horror genre and its various tropes – including its occasional touchings on the theme of incest which features here.

However, the most interesting pieces of her commentary deal with the book’s author Virginia C. Andrews, who may have been inspired to write this tale of childhood being kept in confinement on her own experiences of being crippled. Her name was reportedly credited as V.C. Andrews on the novel Flowers in the Attic. However, she decided to retain the monicker from then on as she felt that she would sell more copies if would-be readers identified her as a man. In fact, a number of female fans sent her nude and bikini photos based on this mistaken assumption! Sadly, the author’s deteriorating physical condition meant that she passed away before the film was released.

An interview with cinematographer Frank Byers, who talks briefly about the look he wanted to achieve for the film and the challenge of shooting the rain-drenched rooftop escape.

The film’s production designer John Muto discusses creating the various sets used in the film. This includes the all-important attic set which was created on the so-called Aldrich stage – where Whatever Happened to Baby Jane?, a film it shares some parallels with, was also shot. He built it in forced perspective to make it look larger than it is. It’s an interesting and informative featurette as Muto shows us some 3D models to illustrate how he created the effect he wanted. He also reveals how he was inspired by French-Russian art director Eugène Lourié.

Jeb Stuart Adams (who played Chris) talks about his role in the film. Although he was playing an adolescent character in the film he was, in fact, 24 years of age at the time of filming. He also reveals that the filmed scenes of incest between him and Kristy Swanson amounted to nothing more than mild kissing and cuddling. He admits that he was disappointed that these were removed and that it should have been a better film than it turned out to be. It’s an unusually honest interview and Jeb should be applauded for speaking frankly about the good and bad.

Composer Christopher Young reveals that he was brought in during post-production after test screenings were run with a temporary score that got thumbs down from audiences. He approached the film by writing the theme for the music box that Cathy receives from her father at the start of the film and building the rest of it around it. He also mentions that director Jeffrey Bloom had wanted to take his name off the credits but decided to reinstate it after hearing his score.

The undoubted highlight amongst the extras here: a glimpse of the original ending shown to test audiences. Just don’t expect great picture quality; it’s taken from an old Betamax tape. We get to find out the fates of a few characters who simply disappeared from the film never to be seen again. We also get a final appearance by Louise Fletcher’s character that’s just as hilariously overdone as the infamous “EAT THE COOKIE!” moment from the reshot ending.

The commentary here is actually an archive audio interview with Tony Kayden, who was brought in to write and direct the reshot ending after Jeffrey Bloom refused to return to the picture. Unfortunately, the audio recording quality is so poor that it’s extremely difficult to make out much of what he is saying.

A gallery of production stills and a theatrical trailer round out the extras here.

Flowers in the Attic is a film with lots of issues but it’s still diverting as a piece of 1980s nostalgia. However, it’s the extras that provide the real weight to this disc.